I traded e-mail with Randy Brooks from Chelan, Washington yesterday. Here’s his note about the Cricket and some photos of his own system.

It’s great to meet you and see you resurrecting the Copper Cricket!
I bought my Copper Cricket in the early ’90s and installed it on the roof of my passive solar home in ’96.  But I left it covered and unactivated until I moved into the house full time in 2000.  I wanted to be sure I could monitor it’s operation.  It’s worked perfectly ever since!  We turn off the circuit breaker for the hot water heater in May and leave it off until October, using only solar hot water.  From October to May we are happy to get whatever solar input we can. 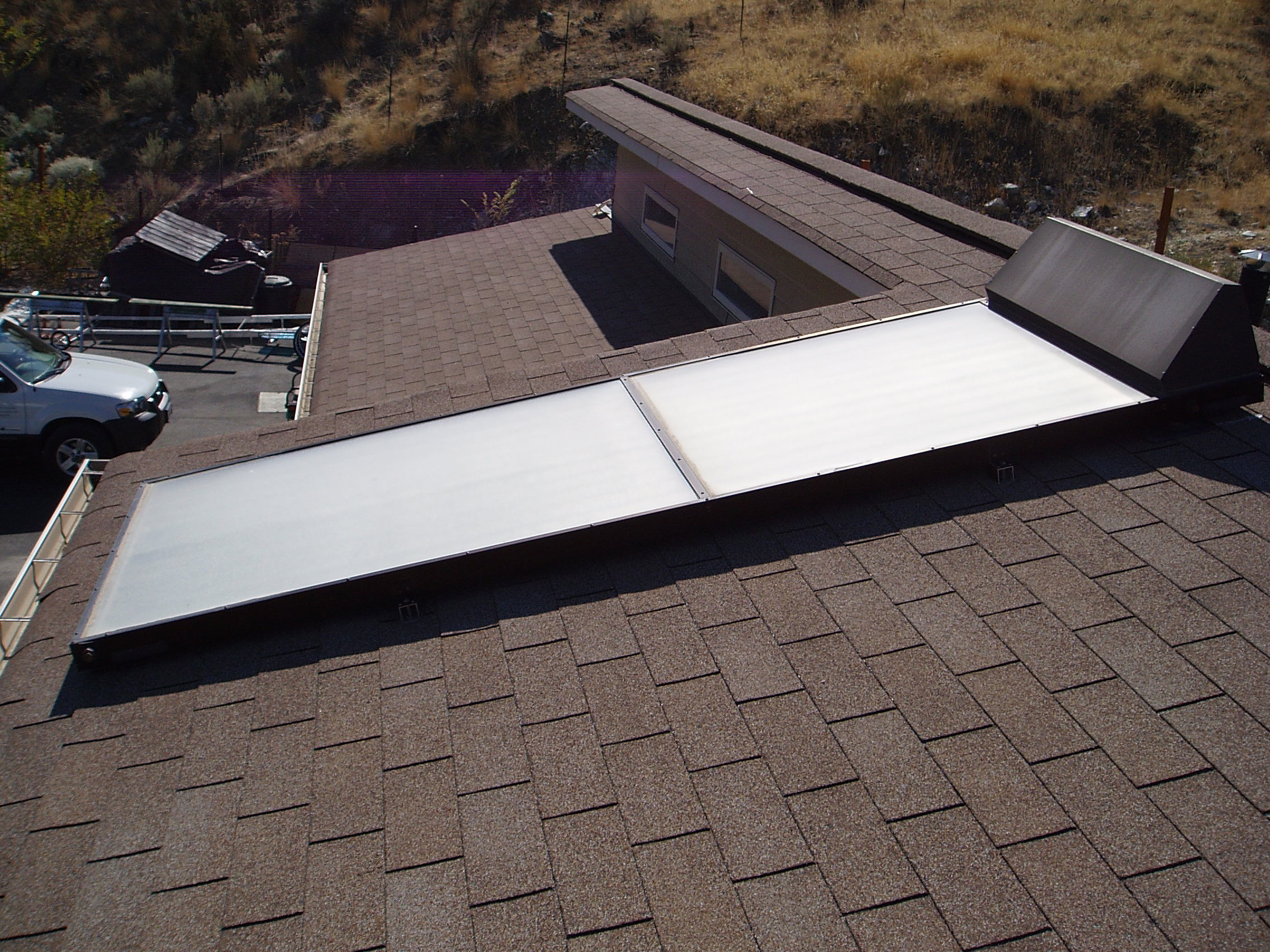 Originally I used the dip tube supplied with the installation kit, but found that having only one electrical element working in winter meant we sometimes had just warm “hot” water.  Last fall our tank started to leak around the dip tube entry, after 16 years, and we replaced it with a stock, two element, electric hot water tank.  This time I didn’t use the dip tube and just plumbed the thermosiphon loop from the tank drain to the Solar Pad, then back up to temperature/pressure relief valve location on the upper side.  I moved the TPR valve to the top where there was an extra hole for it.  We’ll see this summer if this arrangement works as well as the original.
Since 2000 our company, Brooks Solar Inc, has offered Copper Cricket owners copies of my installation and owners manuals for the cost of copying and mailing.  I’ve been contacted by at least a hundred Copper Cricket owners over the years and have travelled as far as the southern Sierras to help get Copper Crickets back on line again.  Many owners have reported flawless operation for 10 years or more, before having to reroof or replace a hot water tank.
The most common problem is when people replace the hot water tank without first covering the collector.  The collector overheats, melts the fuse plug, the methanol evaporates, and the system stops working.  I tell owners where to get a new fuse plug (HVAC suppliers) and methanol (racing shops, where it’s available in small quantities as fuel) and offer to send copies of my manuals and a list of installation kit items.
I also refer people to the closest knowledgeable person (Solar Assist in Eugene, and Mr. Sun Solar in Portland).  I would suggest you list knowledgeable service people on your web site.  I will certainly refer people to your site.  Feel free to list me on your site.
I looked over your web site and it’s great to see the information there.  I think there is a missed link though – the “Owners and Installation Manual for 1B and 2B” links to the Oregon magazine article, not the manuals.
Offering spare parts and do-it-yourself plans on your site would be great.  Many existing owners also don’t have the installation kit, so selling or renting a kit would be helpful. 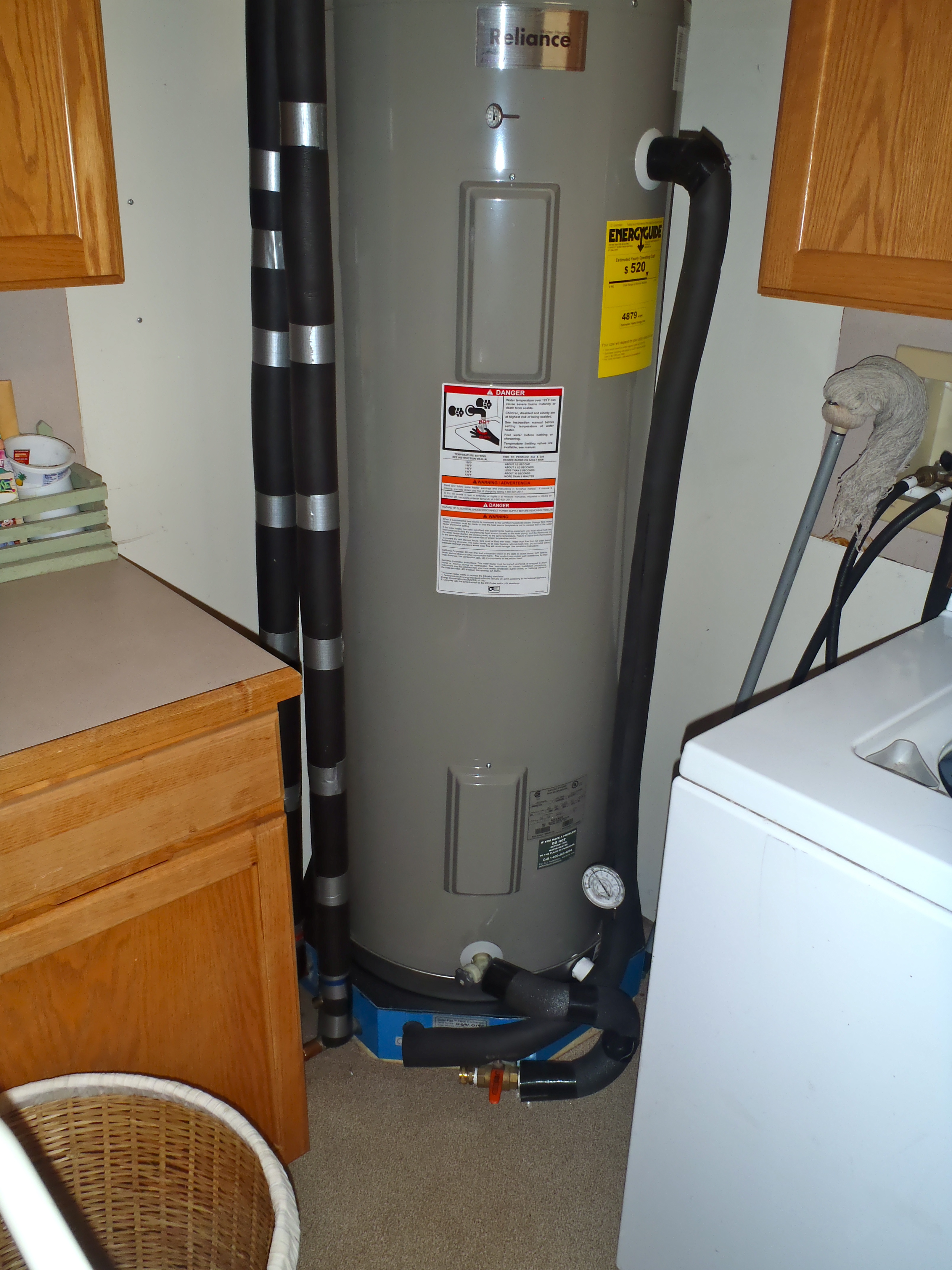 In the last 12 years of installing renewable energy systems I’ve tried to find the simplest and most reliable solar hot water systems for freezing climates.  I’ve never found anything that compares to the Copper Cricket.  I avoid glycol systems because the collector loop is pressurized and the glycol should be tested every 3 to 5 years and replaced if it’s no long pH neutral.  No one ever does this and after 10 years the copper pipes begin developing pin hole leaks and the system fails.  Since Copper Crickets are no longer available, I usually recommend drain back systems (AETSolar.com makes a nice retrofit kit to attach to an existing standard hot water tank) as the most reliable.  These systems use distilled water in a non-pressurized collector loop that drains back to a small tank inside to prevent freezing or boiling.  I have a drain back system myself and it works fine, but has two small pumps and a controller, and makes pumping and gurgling noises.  The simplicity and reliability of the Copper Cricket, with no moving parts, no energy input except solar, and virtually silent, can’t be beat by any currently manufactured system that will work in freezing climates.
Attached is a photo of our system, including the new tank and thermosiphon loop.
take care,

I asked Randy if he had any Tips or Techniques from his many Cricket resurrections and he sent this:

The procedure I use for re-starts is:
1. Cover the collector with a tarp.
2. Drain any remaining solution from the collector loop drain at the solar pad, and at the collector drain on the roof.  (Use a hose to route to a well ventilated area is there is any possibility that methanol remains.)
3. Check the fuse plug and replace if needed, using high heat Permatex sealer.
4. Connect a domestic water supply to the drain of the collector loop at the solar pad, open the collector drain on the roof, and flush the system until clear water is flowing out the collector.
5. Close the drain on the collector to allow the system to pressurize, and check for leaks.  Repair any leaks.  (I don’t think I ever found a leak!)
6. Drain the water from the collector loop and collector, and replace plugs at drain locations, using high heat Permatex.
7. Mix 1 gallon methanol with 4 gallons distilled water in an enclosed container (I still have the 5 gallon plastic bag that came with the installation kit) and fill the collector loop by pouring the solution in the fill port, per the installation manual.
8. After draining air and refilling, per the manual, attach the vacuum pump and evacuate the collector loop, again per the manual.
9. If the system holds vacuum, remove the vacuum pump and remove the collector cover.
10. If there is sun, check the temp at the solar pad to see if the system is “pumping”.
If the system site has “hard” water, I also recommend the owner flush and descale the domestic water side of the solar pad.
I don’t think it would be possible to move the collector enough to re-roof under it, without disconnecting it.  It would be good if a threaded union could be used for the connections under the collector, so it could be removed and reassembled easier after re-roofing.  [We tried several time to use threaded unions in the prototype systems and they always failed to hold vacuum]