Last week, I was on a familiar road in Springfield, Oregon and remembered that a friend had installed one of our early prototypes there, on his home. I glanced through the trees and saw the back of the system on his roof. Today I looked at my contact list in my phone and found his number. I haven’t talked to him for at least 10 and maybe 20 years. I called the number. A woman answered, and I asked, “Nancy?”. She said yes. We started talking, and she immediately remembered me and said, “we think of you every time the sun is out and we’re enjoying our free hot water.” I told her that’s why I was calling and told her about what I’m doing with this web site. Then I talked to Dan, her husband and he started telling me how wonderful the system has been, and that he had had a leak in one of our experimental fittings about 10 years back, and he was able to fix it himself and recharge the system. He said it hasn’t working at the optimum level since then, but they are still able to turn off the breaker to their electric water heater in May and turn it back on in September or October. They invited me over to take some photos, and I took the opportunity today to ride over on my scooter because it’s supposed to rain here for the next 6 days. 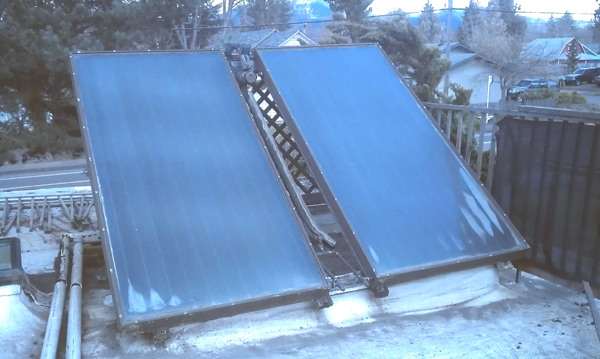 Flat-plate collectors with nucleation risers, and an external Vapor Condenser

This system was installed in 1987, the year we started Sage Advance. These collectors started out with internal vapor condensers made of 1″ copper pipe the width of the collectors. We realized that in hot weather, the density of the solar fluid expanded enough to fill the vapor condenser and then stop the system. We just capped off the internal VC and installed an external VC made of 3″ copper pipe. 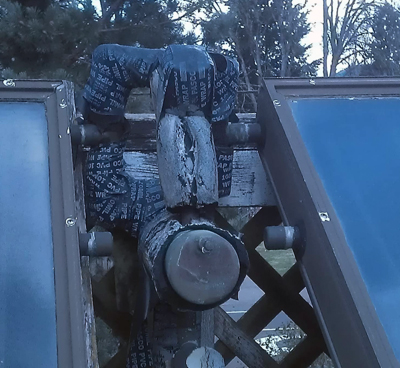 When the weather here improves, I’ve promised to help Dan modify and restart his system. We should be able to get the Delta-T down to less than 20 degrees F. 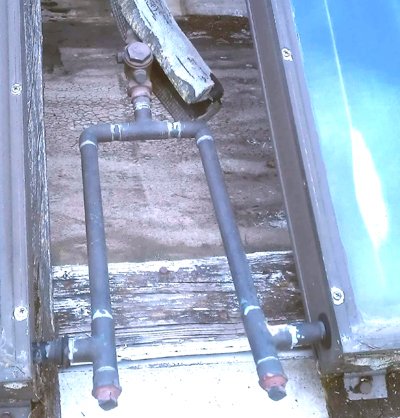 Before we realized the solution to the bubble nucleation problem, we could only get the earlier prototypes to operate by using a check valve. Without bubble nucleation the boiling was so violent that it would drive the cold water back up the faller, so we put in a check valve. We HATED the check valve. It was our only moving part. Therefore, it was evil. This one is still working, but I still hate it and vow to remove it when I help Dan modify the system.

One thought on “Early Prototype”