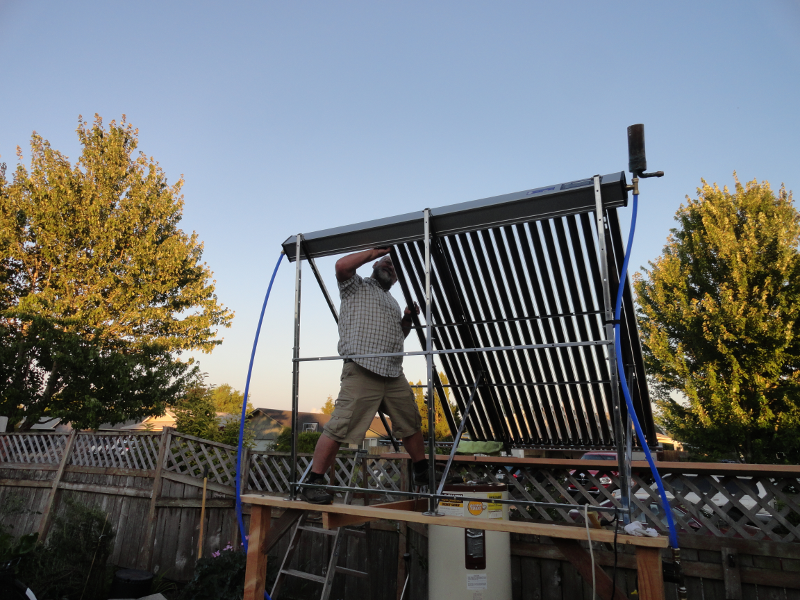 To get some baseline data on the 30-tube array and the heat-exchanger we installed the collector rack above a fence in my front yard with a 50 gallon tank and a SolarPad heat exchanger. The large can on the end of the header is an expansion tank open to the air. This would be untenable in a normal system, but it will allow the water in the system to expand without breaking anything. Because we installed it directly above the electric pump, and because it was on the low side of the header (that started out to be level) we had to move it to the other end.

We had the system up and running by noon and decided to go get some lunch. When we returned the the system had stagnated and did not seem to be pumping. We decided to install an old flow meter in line with the pump to see for certain. We did the plumbing in a hurry without covering the collectors with a tarp. We refilled the system and started up the pump. It worked for a few minutes, then ground to a halt, but the motor still seemed to be turning with no flow. We swapped out the pump, and the system ran for the rest of the day. We also installed a ball valve above the pump so that we can now control the flow rate.

Next on the list: install the Raspberry Pi with 20 sensors and a pump relay. We’re going to build a simple pyranometer so that we have the ability to compare runs from one day to the next. We tested the Pi last summer and developed a very reliable python data logging program. We are still wrestling with the geyser pumper design for this much larger system.