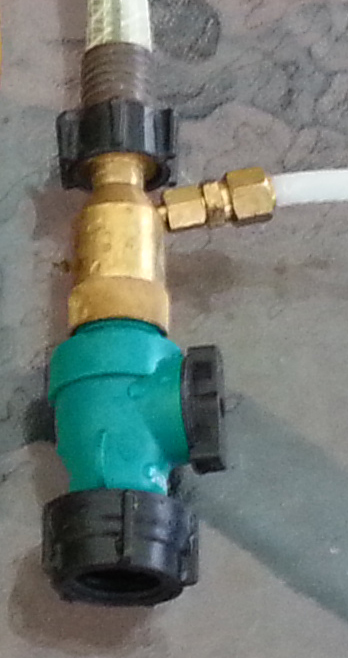 The bane of the geyser pump has always been leaks. When I met Eldon, he and Don Ladigan were working on a prototype. They had attempted to make the header/riser connections with brass braze on copper and fill in the gaps with solder. It didn’t work.

After we learned silver-brazing things got easier, but we still eschewed any possible loss of system integrity.

Fast forward 25 years: The system on my home, the first prototype of a double CC system has been failing for several years. I could get it going for a few weeks, but then it would over heat and stop. I checked every fitting several times and even opened up the collectors and tested them. I couldn’t find a leak. Eventually I went for broke. I filled the system with water and let it over heat and over pressure. I stripped off the insulation looking for a coupling that may have been hidden in a straight pipe run, and found some wet insulation. The copper pipe was discolored. But I couldn’t see where the water was coming from. I emptied the system, pressurized it with air, and sprayed soapy water on the pipe. Withing seconds it flowered into a dozen soap bubble mountains.

I couldn’t imagine what happened. We believed the methanol solution to be safe from acidification, so I surmised that it must have been the pipe. I removed 30′ of 3/4″ soft copper tubing from my attic. I attached caps to the ends and an air fitting and pressurized the two lengths of pipe. There were pin-hole leaks over the entire length of tube. There were no leaks other than in the soft copper tubing, and there were at least 15′ of rigid copper. It must have been the soft tubing.

I replaced all of the soft tubing with rigid tubing and elbows. Last Thursday starting at 5AM before the attic heated up. The plumbing went well, and I finished up the 26 solder joints at 8AM. I had a cup of coffee, and then pressurized the system to 120 psi with air. I couldn’t get the pressure to hold, so I looked up at the collectors and noticed that I had left the fill valve in place and open. Doh! I hopped up on the roof and closed the valve. The system then pressurized to 125 and held, but after an hour it had lost about 5psi. I figured that with 26 joints there was a high probability that I has a leak in one. 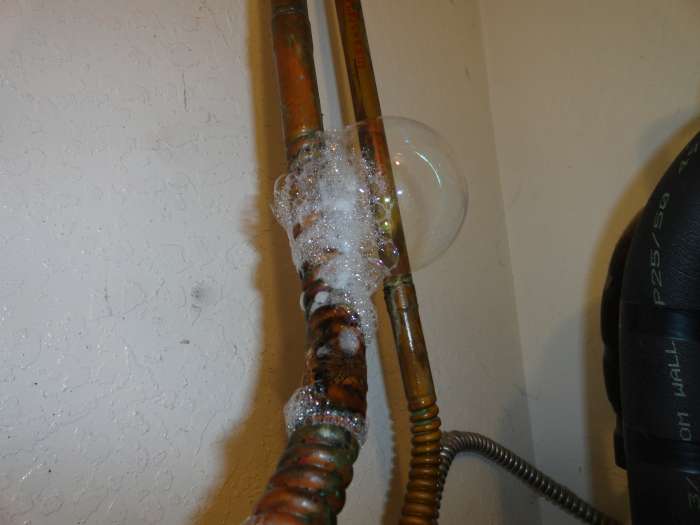 There were bubbles emanating out of the entire 2′ length of the flexible connector.

So it wasn’t the soft copper. This is a completely different piece of copper from a different manufacturer.

NEW THEORY: The methanol solution turns acidic when it sits for a long time in the presence of air. I had left my system sit for about a year after it blew its fusible plug. I’m sure it blew all of the fluid out of the collectors and a lot from the pipe runs. The soft tubing that failed was almost completely horizontal, so as it evaporated, the air interface probably moved down the length of that pipe.

A year later I tried again, and failed but I drained almost all of the fluid from the system. I remember there being more fluid in down near the heat exchanger when I blew air in to pressurize it. I left the fluid in for several months before completely draining the system. I’m guessing that the fluid was up in the flex connector and ate its way through. The other flex connector didn’t show any signs for leaking, so I left it in place. I plan to activate the system again with pure water for  a few weeks before filling it with methanol again. That will flush anything out that shouldn’t be there including the flux from the soldering I just completed.

I rebuilt the Sun Start Chimney pipe with a little more patience and time spent scrounging my garage for better fittings. I was able to find a bronze adapter, but a less expensive piece would have been a 1/2″ SWT to 1/4″ FPT copper fitting. I sweated this together and wrapped it with a few feet of high temp pipe insulation. I also inserted a loose plug of copper scouring sponge down the pipe to reduce fluid loss. I’m looking forward to another sunny day to try it again with the insulated version.

(October 1, 2013) I’ve since told Eldon Haines about this and he built his own out of three-quarter inch copper pipe. I think this is probably advantageous, but we didn’t have enough sun to test it and I haven’t heard from him whether or not it worked. My guess is that it will work better than the half inch pipe because less fluid will be ejected from the end of the pipe. I also found that it does take quite a while for the system to heat up to above atmospheric pressure after you stop the flow through the heat exchanger on the domestic side. The system still has to heat the water that is in the domestic side of the heat exchanger, about a gallon, and that takes some BTUs. 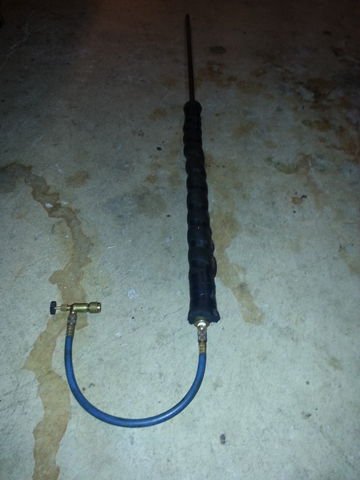 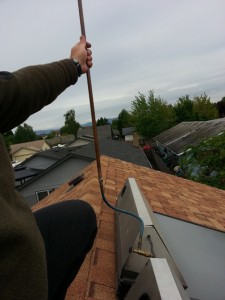 For many years we theorized starting Copper Crickets using only the heat from the sun. We never really got it to work, and certainly never recommended purely sun starts to our customers or installers. I’ve been working on my own double Copper Cricket system, and was having a hard time evacuating it with a hand pump because I have ‘trigger fingers’, two on each hand that make using the hand pump painful. Yesterday I thought of a better way. My system was over heating because it had air in it. I went up on the roof and carefully attached the actuator valve, evacuated the line, closed the ball valve between the hand pump and the collector to protect it from heat, and opened the actuator. Sure enough, there was over 20 psi of positive pressure. That means the system was over 230F. I took a male 1/8″ SAE fitting and silver brazed it to the end of a 4′ piece of 1/2″ copper pipe. I was in a bit of a hurry and burned a hole through the brass fitting, so I had to fix it with more silver braze. It ended up being quite ugly. I took this to the roof with a short refrigeration hose and attached it directly to the actuator valve. I put on a pair of leather gloves, and holding the pipe vertically, I opened the actuator valve. The steam flowed out of the pipe, and any liquid that bubbled out, just stayed in the pipe and flowed back down. It took just a few minutes for the system to return to atmospheric pressure. The long pipe condensed a lot of the steam, returning the condensate to the collector. I’m sure I didn’t lose more than a few ounces of liquid. I closed the actuator and sealed it with the cap. The Delta-T of my system was better than ever before, and I was able to charge the system in full sunlight in a matter of minutes. I’m going to experiment with different larger diameter pipe and different conditions, but this really seems to work well.

I have a few local Crickets that need burping. I’m going to open them up and let some air in. Let them overheat and gain pressure, then attach my charging chimney and let them drive out the air. We’ll see if that does the trick.